The Potomac River is a regular stop on the Realtree Fishing KBF Trail Series and a favorite of KBF competitors. It is a unique fishery, with tidal currents, brackish marshes and big marinas. Both Visit Stafford VA and the local media have welcomed KBF with open arms (in 2020, the local NBC News affiliate interviewed 2019 KBF ROY Derek Brundle).

For this year’s visit, KBF exceeded the attendance levels of previous years with over 100 combined registered competitors. Mild temperatures and favorable high tides (at mid morning all weekend) set up for an excellent tournament weekend, and the river delivered good fish and limits for KBF anglers and also for the Virginia Kayak Trail, an AmBASSador series KBF Partner holding a concurrent event.

It is rare that a KBF TRAIL/PRO SERIES weekend produces three separate winners, because usually one of the TRAIL Series champions compiles the points to win the PRO SERIES event. The Potomac produced three separate champions for its three weekend events, and each of them had different goals. One was fishing for Dee Zee the TEN, another for the Pro Series, and one nearly didn’t fish at all on Sunday. Here is how it went down, with exclusive quotes from each winning angler.

Ryan Nye had an outstanding 2021 season on the KBF TRAIL, winning a 1st place trophy at Lake Candlewood. In early 2022, Nye was also in contention at Lake Murray, finishing in 3rd and 4th place on back-to-back days. Entering the Potomac weekend, he was in position to make a move on the Farwide Angler of the Year KBF TRAIL leaderboard. He would make the most of it after establishing an early lead at KBF TRAIL I and holding on for the win as competitors such as John Ferreira, Paul Armbrust, Nick Audi and Tyler Sweet charged up the standings.

In an interview with KBF, Nye explained his approach to the river:

“I launched from the same area as I did in 2021, and focused on deep channels and marinas. There are large pylons, like telephone poles, around those docks, and I targeted those. On Saturday the tide wasn’t a factor (it was on Sunday), so my bite was consistent all day. I caught fish from when it was dark until 2 pm.

I fished a small Berkley trick worm. I normally fish a Stretching Lines Twitcher Trick (it’s what I used at Lake Murray this year), but I went with a small bait and it worked.

Now my plan is to fish the northern KBF TRAIL events this summer at Messalonskee, Champlain and Winnipesaukee. My goal is to make the TEN. I came close last year. I guess it’s probably everybody’s goal [laughs], so I will be at Kentucky Lake for Nationals this year.”

On Sunday, the incoming tide raised water levels until late morning, when it receded. Not surprisingly, most anglers caught limits while the water was up. Tyler Sweet had posted 82.25” at mid morning and Ryan Matylewicz had 85.75” as they battled for the Pro Series victory (see that recap below). Alex Fiolka had a limit of 90” early on the Sunday leaderboard, and was in first place courtesy of a 20.25” anchor bass that held 2nd place on the Dakota Lithium Big Bass leaderboard, behind Nick Audi’s fish.

In the end, the outgoing tide did not affect the standings much at all. As they told it, anglers found consistent bites throughout the day. Alex Foilka wa sone of them. He had 90″ early on and assembled a solid limit of 92.25” by mid day. Most of the action happened in spots 2-8, where a mere 4” separated 7 anglers. Paul Armbrust posted a late upgrade to move into third place overall, while Matylewicz held onto second place.

In the end, it was Alex Fiolka, a Maryland resident, who prevailed. As he tells it, he nearly didn’t go fishing on Sunday:

I didn’t sleep well Friday, and I spun out in Trail I. There were boats in my area, I didn’t drink enough water. So I left and watched my son play hockey, then crashed.  I woke up Sunday and didn’t feel too good. I went back to bed, and woke up at lines in. I sat and had coffee with my wife, and she said “You paid the entry, so go fish.”

I didn’t get on the water until 7:45 am. The boats were gone, there were some kayaks around. I was where I wanted to be, and didn’t move much all day until the wind picked up. That’s when I adjusted my baits. I am a finesse angler, and I fish small baits, so I focused on structure, and got my bites on wood near a channel bend.

I had to put the bait behind the target. It couldn’t be too heavy – it had to just touch the bottom. As the wind picked up, I realized my bait didn’t touch the bottom enough. So I made my bait slightly heavier, and I worked those baits ever so slightly. As a tidal fisherman, I know how much tide and light come into play, but today it didn’t matter. I caught them on incoming tide, outgoing tide, slack tide. It was all about structure. And today was just one of those days. It just clicked. Yesterday, you could put a hula hoop in front of my kayak and I wouldn’t cast through it. Today, my casts were all laser perfect.

Apparently, I’m a KBF TRAIL II guy. My checks are all from Day II. When you’re tidal bass fishing, that bite window turns on and off like a switch. Today, I never had that struggle, and caught a good limit well beyond that window.  And to think I almost didn’t go fishing today.” 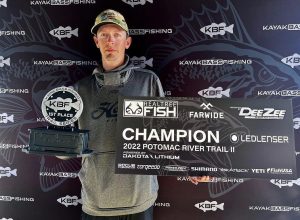 New York’s Tyler Sweet finished 4th overall at TRAIL I on Saturday, but was in 1st place with an 88” limit heading into day 2 of the KBF Pro Series on the Potomac River. By mid-morning, he posted 82.25” and had a lead of slightly over 3” over Ryan Matylewicz on the Pro Series leaderboard. Matylewicz had 85.75” on Sunday at mid-event, and was in second place on the Trail leaderboard. Sweet would ultimately prevail, as he had found a bite that had evaded him in previous tidal fisheries. In his words:

“The only reason I fished the Potomac this year was to earn points for the KBF Pro Series, because I want to qualify for the championship next year. But fishing tidal water isn’t what I am used to – I fished on the upper Chesapeake, and struggled to pattern fish there. But I found grass on the Potomac, and the bass were biting there. It was like fishing a natural grass like, which I am used to….

“I think what I found was a spawning bay. In pre-fishing, my lipless crankbait brought up some green grass. So I figured the bass were staging there to spawn. Sure enough, every bass I caught was a pre-spawn female. The water there was also pretty clear, and I caught my fish Saturday on a Strike King 2.5 Square Bill, in a Sexy Shad color. I struggled a bit more on Sunday, throwing different baits, but I got enough for the win.” 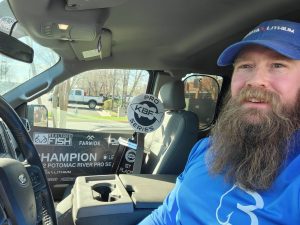 Tyler Sweet, loaded up for the drive home to upstate NY from the Potomac River. Photo courtesy of Tyler Sweet.

Alex Fiolka is sponsored by Delaware Paddle Sports. He fishes with a Torqeedo Motor. He fishes out of a Hobie Pro Angler rigged by Innovative Sportsmen.

The KBF TRAIL and PRO SERIES was hosted by Visit Stafford VA. 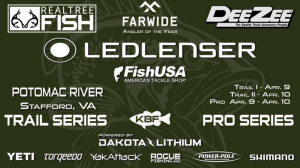