It was 15 minutes before lines out on the Potomac River on Sunday, May 2nd and John Tibbens had the lead with an 89” limit. Eric Polenz, who won a KBF TRAIL at Pickwick-Wilson-Wheeler last month, was only 1” from the lead. Would Polenz upgrade and take the win? Would Tibbens upgrade and seal it? Not far behind were several other anglers, among them Mike Elsea and Ryan Matylewicz, who had their eyes on the victory. What they would do would change the Farwide KBF Angler of the Year Race for the season and shake up the standings for angler trying to qualify for KBF THE TEN. 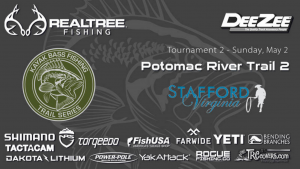 The Realtreefishing KBF TRAIL presented by DeeZee returned to the Potomac River on Sunday with 82 anglers launching to compete for qualifying spots, cash prizes and precious Farwide KBF Angler of the Year points and points for Rookie of the Year presented by Rogue Fishing. The points race was a major story line for the weekend, as several new anglers broke into the Top 10.

Among those anglers was John Tibbens, who improved his KBF AOY position with a 7th place finish on Saturday. But Tibbens was looking to move up even further…..

Sunday began with familiar names atop the leader board, as 2019 Rookie of the Year Derek Brundle posted two fish to take the lead with 29.50”. 2020 KBF National Champion Matthew Conant quickly moved into 2nd place with 28.25”. In the early going it seemed the decorated anglers would set the pace for the morning and solidify their top 10 standings. 2019 KBF national champion Mike Elsea also climbed into 5th place at mid-morning.

But other competitors had different plans. Sterling Leach held the early lead on his way to a strong 3rd place finish. And then Tibbens began to climb the leaderboard.

Jump forward to the final casts, and the anglers at the top of the leaderboard remained in place. There were no dramatic last minute fish, only a quiet anticipation for the final results. Tibbens’ victory would hold.

The Farwide KBF Angler of the Year leaderboard was a different story. ..

Three anglers – Tibbens, Polenz and Ryan Matylewicz – broke into the top 10, and Mike Elsea improved his position there, too. Ryan Nye also climbed the standings, courtesy of back-to-back 4th place finishes on the Potomac River. In the end, one third of the Top Ten had changed, and the Potomac River KBF Trail would prove to be an important pivot in the 2021 KBF AOY race.

Additionally, with the KBF TRAIL looking ahead to its debut at Candlewood Lake in Connecticut in three weeks, Northeast anglers like Derek Brundle, Matthew Conant, Ken Wood and others who had been atop the standings or on the cusp of the TEN will be competing closer to home, and perhaps moving back into the top 10 of the AOY race. Or another angler may emerge and make a long, late season run to shake things up.

With five KBF TRAIL weekends in the books, and five more to go, Tibbens’ victory had major consequences in the KBF AOY race. This is why we compete. It’s the long drives and days. It’s the hustle for waypoints and AOY points. It’s the grind of a long season, where every decision has consequences in competition, and every cast matters.

Is there an angler lurking out there who has yet to make a run over the second half of the season? Will it be you? Sign up, and stay tuned!

Bucketmouth Brand Big Bass: Victor Hendrix’s 20.25” bass was the longest of the weekend.

The KBF TRAIL on the Potomac River was hosted by Stafford, VA: https://staffordcountyva.gov/64/Visiting