KBF TRAIL Series competitors discovered an aspect of Toledo Bend that some had never experienced before, with lake levels down six or seven feet leaving familiar hot spots high and dry and stump fields exposed to view. Still, a chance to pit themselves against top Texas anglers on this world-famous big bass factory brought 48 kayak anglers out for the Nucanoe KBF TRAIL Series Tournament on the last day of August.

In eight hours of competition, 131 photos of bass up to 21.50” averaging 14.70” were uploaded to TourneyX. (17 of those bass were culled, leaving 114 on the NRS Leader Board. Only ten competitors managed five-fish limits. 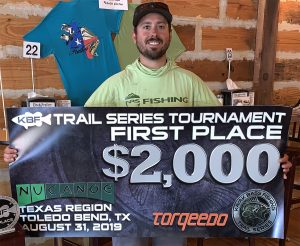 Tops at Toledo Bend was Matthew Scotch of Lake Worth, Texas. Matthew came into this event as a favorite, having won several KBF tournaments there. He ended up the day in first place in both the KBF TRAIL Series Tournament and the KBF Pro Tour Tournament.

Spectators following along on the TourneyX Live Leader Board speculated that Matthew might be holding onto a stack of big bass photos. Actually, when competing, he doesn’t like breaking his stride to stop and upload fish, preferring to fish while the getting’s good and upload after then bite’s died down.

He fished shallow all Saturday morning, along little creek channels across shallow flats where he’d found bass during prefishing. His first bass, 15.50”, came on an Accent finesse buzzbait, but top-water action was slow. He gave frogs, spinnerbaits and Chatterbaits a shot, too. The area in which he caught fish gets a lot of pressure throughout the summer, and he decided that calls for a finesse approach. Figuring that marauding bass would hang out near active bream beds, he switched to swim baits that more closely resembled bream. That proved to be the ticket. He worked the area, then left, returning twice more, filling out his limit and upgrading each time.

Besides his lure selection, Matthew credits fishing from a kayak that functions as a paddleboard, enabling him to stand and look down into the water to spot forage and game fish. In the thick vegetation where pedaling wasn’t practical, his Hobie Outback’s ease of paddling enabled him to work weedy areas efficiently. When guiding or coaching other kayak anglers, Matthew recommends looking at Hobie kayaks and NRS products at Mariner Sales. He will also be happy to explain why he has so much confidence in fishing lures by Accent Fishing Products and Excite Baits there, too. 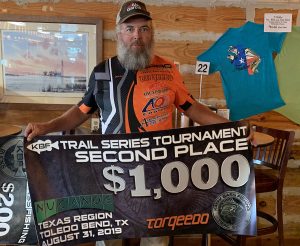 Another KBF heavy-hitter is Brad Case from Mississippi, who had Second Place finishes in both the KBF TRAIL and Pro Tour tournaments. Brad’s approach to prefishing is to observe more, fish less. This year, Toledo Bend didn’t surrender the numbers of bass it had in previous visits; Brad went hours between bites, sometimes. And when the bite slowed down, he stopped fishing and just sat in his kayak, looking, observing the current, breeze, and baitfish, spying clues that he can convert into bites. For instance, he observed that, on a fairly calm day, bass surface feeing activity increased whenever the lake surface was broken up by the wind.

Brad and Toledo Bend are old friends, and he has several areas he regularly checks out in late summer. All five areas, in both Louisiana and Texas, have lily pads (some not so much after “weed eradication” programs) and are capable of producing winning strings of bass if forage is present. This year, Brad discovered the lake had dropped six feet or so, making one of his honey holes inaccessible—or at least not worth the effort to pole and paddle through masses of water weeds to reach. He caught resident bass in a couple more locations but saw very little bream, minnow, or shad activity that would pull big numbers of bass in from the lake or put them on a feed.

Brad’s fourth spot during prefishing was a feeder creek carrying cool water down to the lake. He spotted baitfish movement immediately. Steve Elliott, who finished in 5th place, was already on the water when Brad arrived at this out-of-the-way spot. This time of year, big bass sometimes move up into the relatively cool creeks (81° compared to 86° at the mouth) and hang out in the shade, right against the creek banks. That’s what he found this past weekend. While Steve went up the creek, Brad worked his way down, and both found bass. More importantly, they both spotted plenty of shad and minnow activity.

One more spot-check produced a 5-pounder on a frog, but four hours of fishing, floating, and watching convinced Brad that the area would be a bust on Tournament day. A few balls of shad could be seen, but they were not being bothered by feeding bass.

On Tournament day, Brad tied a Spro Fat John 50 onto 30# braid (no leader) and began catching fish right against the bank. Having learned his lesson on other lakes, whenever he found cell service, he tried to utilize it rather than waiting until the last hour, as Matthew did. 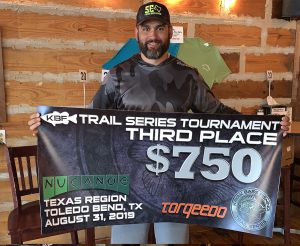 After being awarded Third Place, Tony Sebren (TX) observed, “My Tournament Day pattern really didn’t develop until midday when the sun was directly overhead, making it much easier to pinpoint where bass should be positioned. If I found shaded grass on the bank, I found bass, regardless of depth. I could almost bet on which of my casts were going to produce a fish—that’s how consistent it became. I had tons of blowups on a frog, which was the most productive lure for me.”

The key for Tony was finding spots that he knew hadn’t been touched by another bassboat or kayak, at least for that day. He boated just 12 fish, but those were enough for him to finish in the money.

Another KBF angler familiar with Toledo Bend is Jamie Broad, who took Third Place in the KBF Pro Tour and Sixth in the TRAIL Series Tournament. By studying club and guide fishing reports, Jamie got a sense that the bass were up shallow. While prefishing, he saw lots of big bass where river channel came up onto flats. He fished lily pads in 3-4 feet of water, right on channel bends, and his strategy paid off with two hourly Big Bass Brawl $50 checks and the Daily Big Bass $500 prize. He alternated between 3/8-ounce Accent buzzbaits and a Top Toad (which was what fooled his 21.50” big bass). He also had success on a half-ounce Accent spinnerbait—“One of the best baits I know,” he said. With the lake down six feet, dense, matted vegetation, and stumps exposed everywhere (he’s never seen so many on this lake before), Jamie’s 65# braid was a huge aid in getting his lure to the bass the bass out of thick cover. Big game tackle for big fish.

Here are the top ten from the TRAIL Series event: 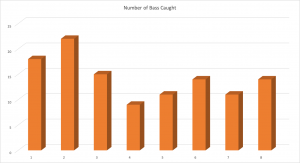 Qualifications that were earned at this event 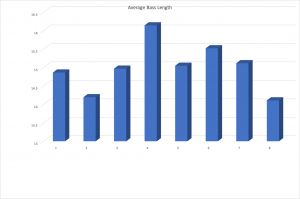 In addition, some competitors picked up additional AOY Points that nudged them into the TRAIL Series Texas Regional Finals, too, or that helped them in the Regional and National AOY
KBF BONUS BUCKS

Many thanks to Jason Willis for putting in the time and work as Tournament Coordinator to pull this event together and manage it, and to Duc Tran who served as the KBF Texas Regional Coordinator for 2019. And a special note of appreciation goes to Nucanoe for its sponsorship of the Texas Region 2019 KBF TRAIL Series.