by Hank Veggian (with Chad Hoover)

“Bucket list” lakes – they are the waters that all anglers dream to fish on one day. And for the past six years, KBF has held the biggest event in the sport of kayak bass fishing on those lakes. For a handful of anglers, fishing them has resulted in another dream coming true: landing the Largemouth Bass of a life time on the biggest stage in the sport.

“Big Bass Back Stories” compiles the tales of some of the anglers who have realized that dream of catching the bass of a lifetime while attending the KBF National Championship. It happens to at least one angler every year, and we have compiled a “greatest hits” of those catches below.

The 2022 KBF Championship tournaments will be held in Paris, Tennessee on October 19-21, where the event’s rich history started on Kentucky Lake in 2016. It is only appropriate that our stories begin with bass from that lake……

In March of 2016, 230 anglers from all over the United States gathered on Kentucky Lake to compete in the first ever KBF National Championship. A separate charity event for Heroes on the Water called the Big Bass Brawl was held during that time. It took place over four days, beginning two days prior to the championship and extending through it. The idea was to raise money during the pre-fishing period and also provide anglers with a chance to win prizes for huge fish they caught during practice. Georgia angler Rok Ly won that event with a 23” tank of a pre-spawn Largemouth.

In Rok’s words: “It was pre-spawn with the water temps in the high 50s. I found [bass] staging at the mouths of creeks on points in 5-10ft of water. With the lake at winter pool levels, they weren’t quite ready to pull up into the shallow flats. I used a variety a lures but a 1/2 oz lipless crankbait in black and gold was catching them real good.” 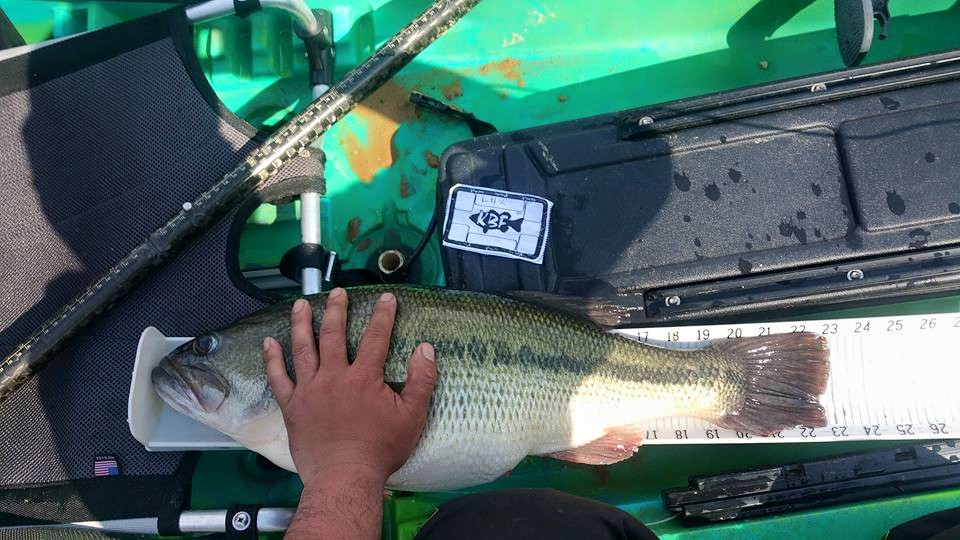 The 2017 KBF National Championship returned to Kentucky Lake in 2017. It is primarily remembered for the close finish on the final day and Kurt Smits’ dramatic victory.

2017 produced another massive bass, and this one earned a check. Georgia angler Everett Park caught a 24.25” that won the H.O.W. Big Bass Brawl. Park’s fish remains tied for the third longest bass ever submitted to the KBF leaderboard during the championship event.

The 2018 KBF National Championship is remembered for the record-breaking size of the field of competitors (750 anglers attended) and for its record-breaking payout, where Texas angler Dwayne Taff earned $100,000 for his victory.

Kentucky Lake produced huge fish despite cold fishing conditions. On Day 1, Mike Elrick landed a 23.50” giant, while David Klosterman’s 22.25” topped the Day 2 leaderboard (2018 was the final version of the two-day championship, so there was no Day 3 cut). Elrick’s monster bass was amazing, but there is a Big Bass Back Story that has not been told, about an angler who caught his personal best during practice, outside of any competition time.

West Virginia’s Brian Aliff requires no introduction to veteran KBF anglers. He is a Trail champion, a 2018 qualifier for Dee Zee KBF The TEN and the winner of a legendary KBF Open event that went to the wire on Santee Cooper in 2018. Aliff’s accomplishments as a tournament angler are many, and amazing.

In 2017, Brian placed 18th overall in the H.O.W. Big Bass Brawl on Kentucky lake with an impressive 21.50” bass. But it was a bass he caught during pre-fishing in 2018 that proved to be the fish of a lifetime. A photo of it still graces his TourneyX angler profile….

“Tony Brown and Jody Queen were with me when I caught the fish. I caught it on a 412 spinnerbait. That fish was so big I didn’t lip it with my thumb. I had to put all four fingers in its mouth and lift it with my thumb on the outside. It was so heavy I just held it in the water. Tony was right there when I caught it. To this day, Tony tells me he will never forget what I said when I grabbed that fish. I turned and asked him ‘What the hell am I supposed to do with this?’””

Jody [Queen] was on a point, and he came back around to weigh the fish. I was in a Jackson Coosa and I laid the Hawg Trough across it. When I put the fish on it the board bent like it was gonna break. It was 25” long and it weighed 10 pounds, 6 ounces.”

“I remember that big fish clearly, like I caught it yesterday. I can see it all in slow motion, close up.” 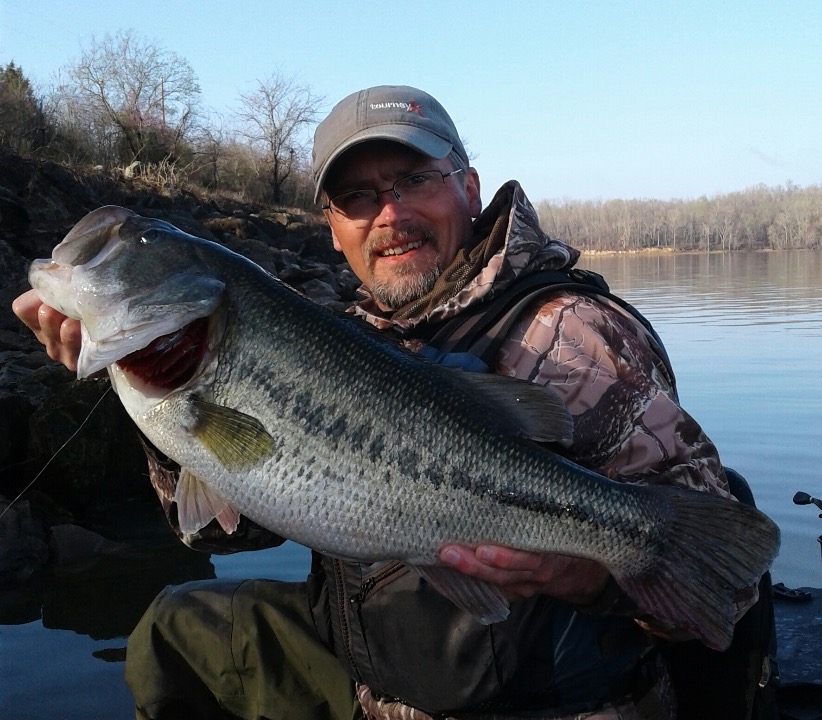 The 2019 KBF National Championship in Shreveport-Bossier City is remembered mostly for how Indiana angler Mike Elsea shocked the kayak fishing world by defeating more than 400 anglers and winning the championship in his first-ever live tournament event.

Elsea’s win overshadowed the fact that anglers fishing Caddo Lake, the Red River and other area waters put up some huge bass during the competition. On Day 1 alone, multiple 24” bass were landed, along with many other fish over the 22” mark. For some, those were a personal best and the massive fish they hoped to catch in Louisiana. But they all paled in comparison to the 25.25” monster that Armanzo Saucedo caught that day.

You read that correctly: a 25.25”. It seemed nobody would ever top that fish, but then Guntersville happened…

By the lake’s legendary standards, Lake Guntersville fished small for the 2020 KBF National Championship. On Day 1, quantity exceeded the quality of fish, and the largest bass were in the 21-22” range. On day 2, not a single fish over 22” was submitted to the leaderboard. On day 3, defending national champ Mike Elsea landed a 23.50” toad, while Matthew Conant clinched several titles, including that of KBF Rookie of the Year and KBF National Champion.

For anglers who did not make the top 100 to fish Day 3, there was a side competition taking place. Designed to introduce anglers to the new Fishing Chaos platform, that side event resulted in the fish of a lifetime for one fisherman.

Alan Reed was fishing a buzzbait near some Guntersville grass beds in the late morning. Skies were overcast and a light rain was in the area. In the distance, a hurricane was approaching.

And so was the longest bass ever submitted during KBF championship competition.

Cody Milton vs. Guillermo Gonzalez – that was the epic battle of the 2021 edition of the KBF National Championship. Both anglers averaged 100” per day and Gonzalez won the title of national champion with an astounding 3 day limit of 303.75”. On the way to that victory, Gonzalez submitted multiple fish over 20” in length.

A new format was introduced for what would become the Dakota Lithium Big bass leaderboard: an angler’s best two fish. The Big Bass tournament was won by Brandon Bissell who would claim the Rogue Fishing Rookie of the Year title. Bissell landed a 23” and a 22.75” bass to take the big bass event’s top spot. On that leaderboard alone, 39 anglers averaged at least 20” per fish, Barry Davis also landed a 23”, and Jim Ware landed a 23.5”.

If you didn’t look closely, you might have missed it, but when you saw it, you wouldn’t forget it: Josh Duffel’s 24.25” monster bass. That fish elevated Duffel to 5th place on the big bass board, and was the longest submitted in competition. It is tied with Everett Park’s fish as the third longest bass ever landed during KBF National Championship week. 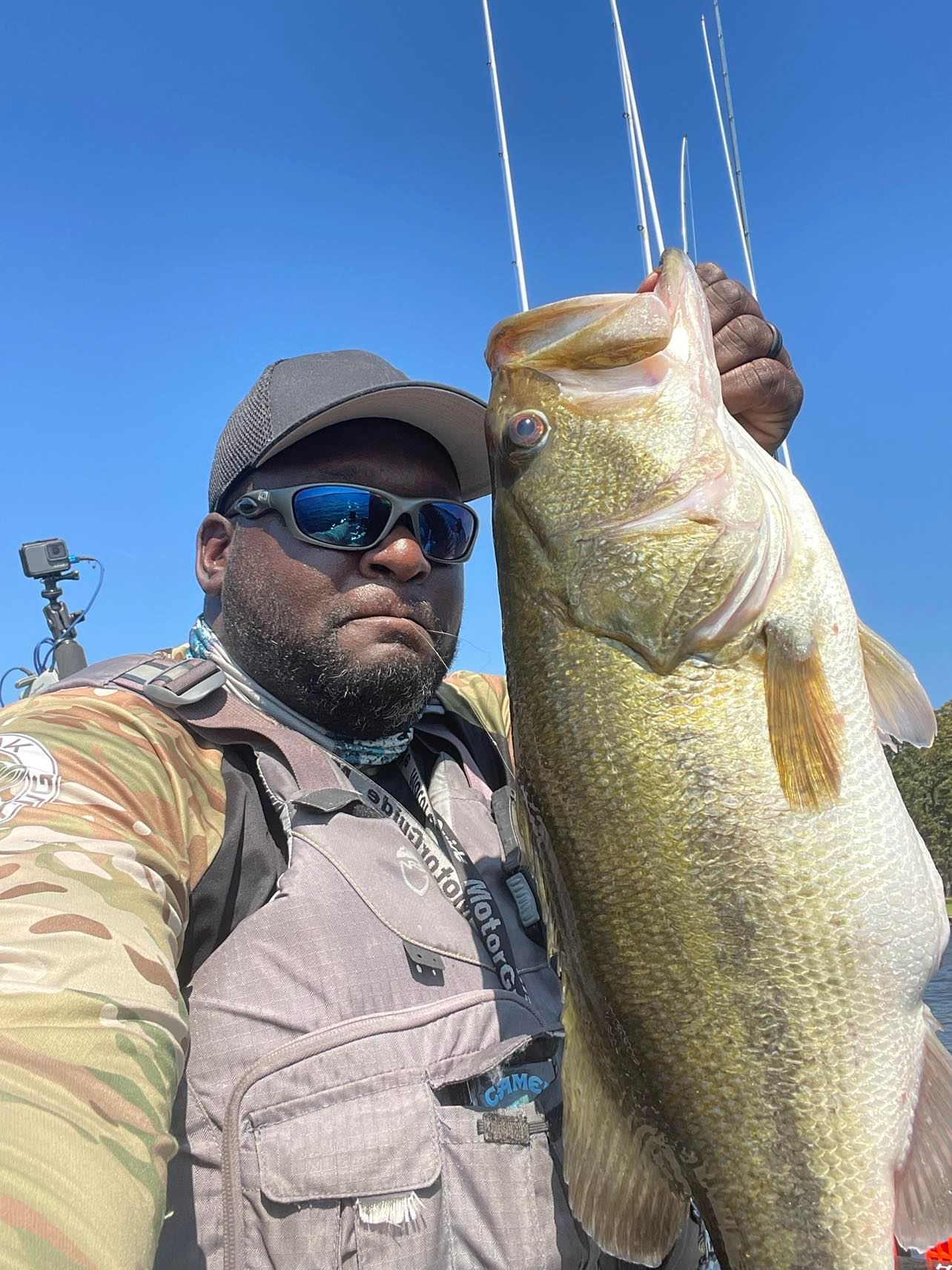 “I was pre-fishing Black Cypress Bayou. It had been a slow day as the only fish I could find were all small. I was working a dock pattern using black n blue small creature baits. All the fish I was catching were at the backs of the docks closest to the walk platform. I decided to make a move to the opposite end of the lake where the deeper water was as shallow was only producing smaller fish. I was rounding a main lake point with docks that were in 10-15’ of water. I noticed on my sides scan that these docks had shad suspended around 8’ on them. I graphed past and made a U-turn then started targeting this area with a DT6 in shad pattern and could not produce a bite.

So I put on a Texas rigged Googan Trench Hawg with a 3/8th ounce weight. I upsized the bait in hopes of producing a bigger bite. Set up a drift to target the front of the doc. She hit it as I was twitching it along the bottom and I swung on her. Didn’t think she was all that big but I knew she was better than what I had been catching. It wasn’t until she jumped that I realized she was special. During the fight she tail- walked and hit the trolling motor which had my heart racing. I kept my cool until she was in the net. 23.5”, 11.73lbs with a 25.5” girth  – she was a special fish!”

Who will catch the bass of a lifetime this year at the YakAttack Kayak Bass Fishing National Championship on Kentucky Lake in Paris, Tennessee? And will it be you? 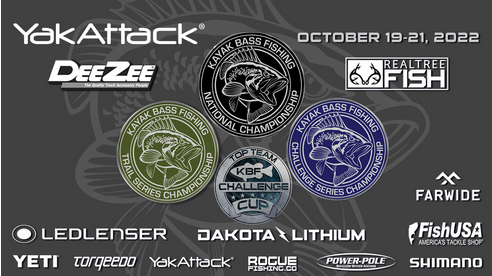 Click for a retrospective of the 2016 KBF National Championship

Click for a retrospective of the 2017 KBF National Championship

About the author: Henry “Hank” Veggian is a member of the Jackson Kayak Fishing Team. A tournament director for Carolina Kayak Anglers, he is Communications Director for Kayak Bass Fishing, an educator and ambassador of our sport, and an accomplished tournament angler. His writings on kayak fishing have appeared in numerous publications.