You often hear people talk about the “kayak fishing family.” It’s a big, tightly knit community, and it keeps growing every season. But “family” is meant metaphorically, in most cases.

Saturday, July 24th was an exception for Robert Weiker. It’s not every day that a kayak angler wins a tournament with his entire family in attendance, but Saturday’s Realtree Fishing KBF TRAIL presented by Dee Zee was one of those magical days for Weiker, who is a Dakota Lithium team angler.

We’ll get back to that story, but first, some more about the metaphorical family. Kayak Bass Fishing has held an event from Lake Erie’s East/West Harbor every year since 2017. That continuity has given KBF the opportunity to build strong relationships with local businesses, KBF Partner clubs and the anglers we serve. The July 2021 stop of the Realtree Fishing KBF TRAIL presented by Dee Zee was the culmination of those years of work. The result was a highly attended weekend of camaraderie and competition.

Before we recap Trail I of the weekend, KBF wishes to thank Ryan Havlicek for his tireless work to help run the event. Ryan’s club and the Buckeye Kayak Fishing Trail were outstanding in their support for the event, as was Fishermans Central (Port Clinton, OH), who hosted the awards ceremony and provided extra prizes to competitors. 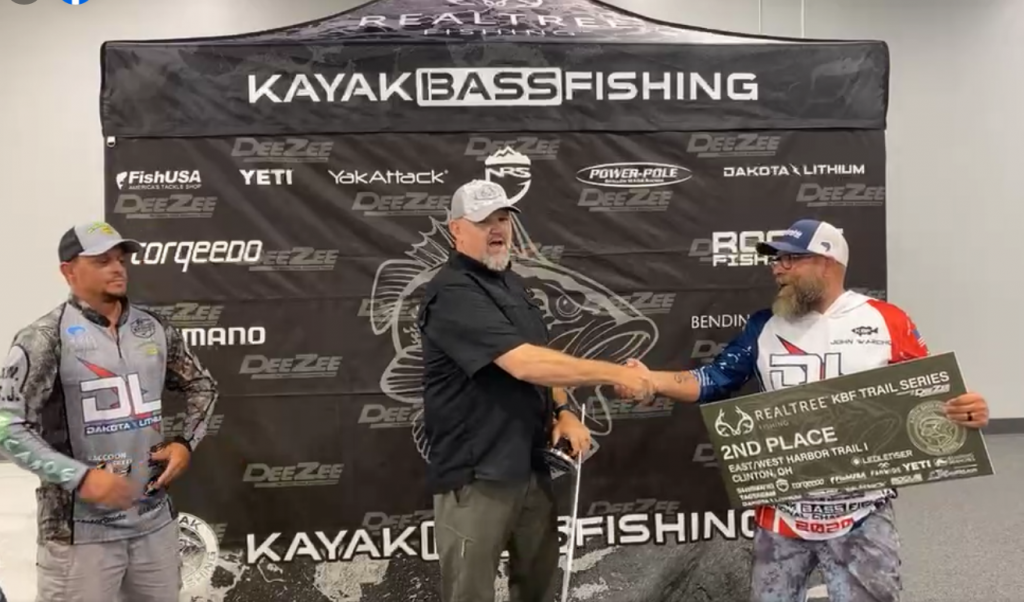 The KBF TRAIL at East/West Harbor was one of the biggest single day tournaments of the 2021 KBF TRAIL season. 103 competitors began casting at 6 am, and the early bite was fast. Virginia’s Casey Reed posted the day’s first limit and he sat atop the leaderboard with 78” after the first half hour of fishing. Justin Kivett, Darrell Cornelius, Robert Weiker and Nicholas Staler posted two fish each during that time. As the morning wore on and more limits came in, Weiker worked his way to the top of the leaderboard with an 85” limit.

In the meantime, another race played out on the leaderboard – the Farwide KBF TRAIL Angler of the Year race. Several anglers in the top 10 were looking to improve their points, among them Kristine Fischer, Jody Queen, Casey Reed, Matt Kiefer, Ryan Nye, Cody Milton and others. Rus Snyders, the current leader, was one of them. Fischer and Queen would finish in the top 10 at the end of the day, adding a twist to the race with Queen taking over the top spot from Snyders.

In the main event, the bite was beginning to heat up at mid-morning as anglers posted more limits and began to upgrade. Robert Weiker steadily battled up through the standings all day long, his wife and children following the results on Fishing Chaos. His 20.75” Largemouth Bass claimed the top spot on the Bucketmouth Brand leaderboard, and with that anchor fish his upgrades climbed from 85” to 95”, a jump in average length of two inches per fish.

A late flurry from John Warchol made things interesting, as Warchol passed Aaron Stallbaum to move into 2nd place. Weiker remained focused, fishing right to the finish line. He had extra motivation. His wife and children were literally watching him compete as the tournament wrapped up. As he noted during the awards ceremony, “My family was at the ramp, cheering for me at the end while I fished one last spot.”

If that wasn’t good enough, there is more – Weiker was competing for a repeat. On July , 2020, nearly one year to the day, Weiker won the KBF Trail event at East/West Harbor, and his family celebrated it with him, too – except for one. As he told KBF:

“It was an amazing win for me because my family came last year when I won but my daughter missed it. This year she was there with all of us and at the end of the day they were on shore watching me and cheering me on from the shore. I told her I was gonna win this one for her and she said “Dad I’m so proud of you whether you win or not. You’re the best fisherman in the world.”

Reflecting on the back to back wins, and what changed from one year to the next, Weiker noted he change dthe area where he fished. “We took the whole family up to Erie for our family vacation and practiced the same areas I won last year. My fish weren’t really there until I made a slight move to another surrounding area and I caught a 19.75 17.25 and 18.5. I decided yup I’ll be fishing here for the tournament.”

“Tournament day started off hot flipping grass I caught 13 keepers the first hour then the bite slowed down but the bites I got were big ones. I didn’t really have ‘em nailed down, just flipped and dragged soft plastics through everything that was different in the grass. At the end of the day I had an outstanding practice and the fish were there when I needed them to be.” 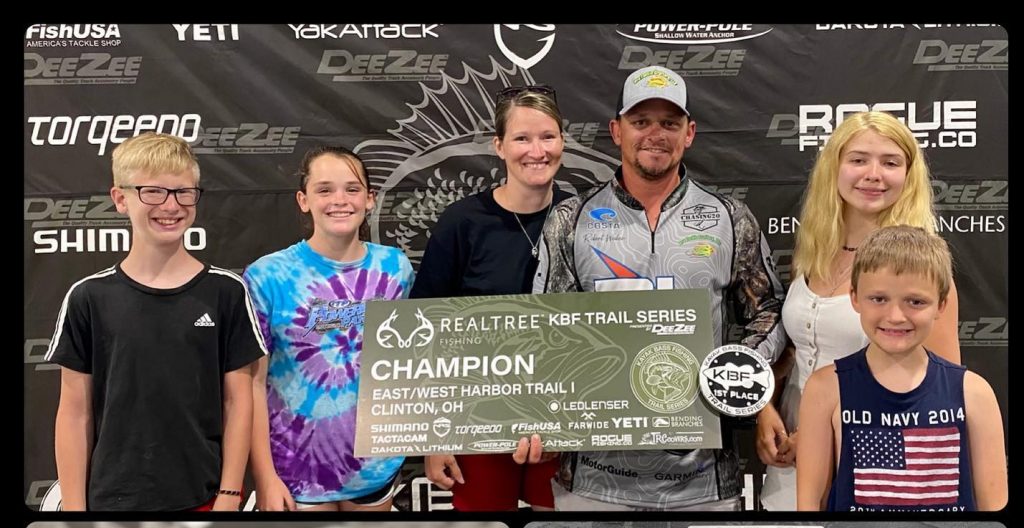 Family – it means a lot of things in our sport. It means friends and community, and also tradition. For Weiker, tradition now means back to back KBF TRAIL wins on the same lake, two years in a row.